This year’s Korean Cinema includes a huge number of documentaries. Aftermath is a film by Kim Jinhyuk who left EBS in 2013 when the company ordered him to halt the production of the documentary on the Special Investigation Committee of Anti-National Activities. Five years after his resignation from the company, he visits the people he interviewed about the Committee to restructure the film. Woo Kwang-hoon’s Jikji Route, Terra Incognita is a sequel to Dancing with Jikji (2017), which was selected to screen as a part of the Korean Competition of JEONJU IFF. Just like its prequel, the documentary follows the crew’s journey all around the world to prove the hypothesis that Gutenberg’s metal type copied Goryeo’s Jikji. People Crossing the River (2006)’s director Kim Duk-chul has crafted The Family of One Hundred Years for a long time. From the nationalistic education movement conducted by Koreans living in Kawasaki, Japan, to the battle against hate speeches, the film offers an opportunity to witness the spirit of Koreans who have overcome the suppression from the Japanese government. Blooming over the line depicts the life of Rev. Moon Ik-hwan. From the painful loss of his friends Yun Dong-ju and Song Mong-gyu to his visit to North Korea in 1989, the film remembers his life as a whole. Rev. Moon’s voice is restored through AI technologies, leaving an even bigger impression. Jung Jae-hoon, who has grabbed people’s attention with Hosu-gil (2009), created Trans-Continental-Railway, which is technically not a documentary. Still, it is an experimental film or music video that follows a documentary-like narrative. Composited with Band Organic Beer’s music video, the film combines fierce sound with documented videos.
The new films by the regulars of JEONJU IFF, the directors who have joined the festival many times, are also introduced. Choe Equan, whose films If I were You (2016) and roooom (2018) were selected to screen in JEONJU IFF, created a film MY SON that depicts the story of a disabled son, his father, and people around them. The film is based on the play Kill Me Now, and its main actor Jang Hyunsung was nominated for the Best Male Actors section at the Milano International Film Festival Award in 2020. Ko Bongsoo, who continues to join the festival since he won Korean Competition with Delta Boys (2016), also offers a new film. The rain comes soon depicts a funny and sad story that unfolds around the various people who visit a film screening on a hot summer day. In addition to Ko’s crew, actor Lee Hui-jun also appears in the film. Choi Changhwan, who screened two films in Korean Competition, Back from the Beat (2018) and The Boy from Nowhere (2019), for two consecutive years has also joined with a new film. Plant Cafe, Warmth shows various stories created by the owner and customers at a café that sells and treats plants and trees. As an analogy between people’s stories and plants, the film is an “illustrative book of plants for life” shaped through analog sentimentality. The Slug’s Choi Jinyoung participated in JEONJU IFF once with Yeonhuidong (2018) in Korean Competition and has continued to create films with Jeonju at its center. In The Slug, Chunhui gets struck by lightning and meets herself as a child. Many places in Jeonju are depicted throughout the film.
Also, emerging directors showcase their debut films. Yang Yunmo’s Shape of Tulip is a strange love story. It depicts the reunion of Yuriko, who comes to Korea to find a guy she met out of the blue in Tokyo, and Seok-young, who finds his favorite female actor from classic Japanese films in Yuriko. When Winter Comes shows the changes inside a man who has given up making films and became a bus driver when he meets a woman. The former Korean girl group member Han Seonhwa’s acting is striking. In Rolling Girl, the protagonist who used to lock herself up at home away from the outside world is forced to take care of her mother’s kimbap place temporarily. Shim Dalgi, who plays the protagonist, depicts simple and subtle emotions inside people remarkably. Please don´t forget to take a look at 11 short films with different charms. 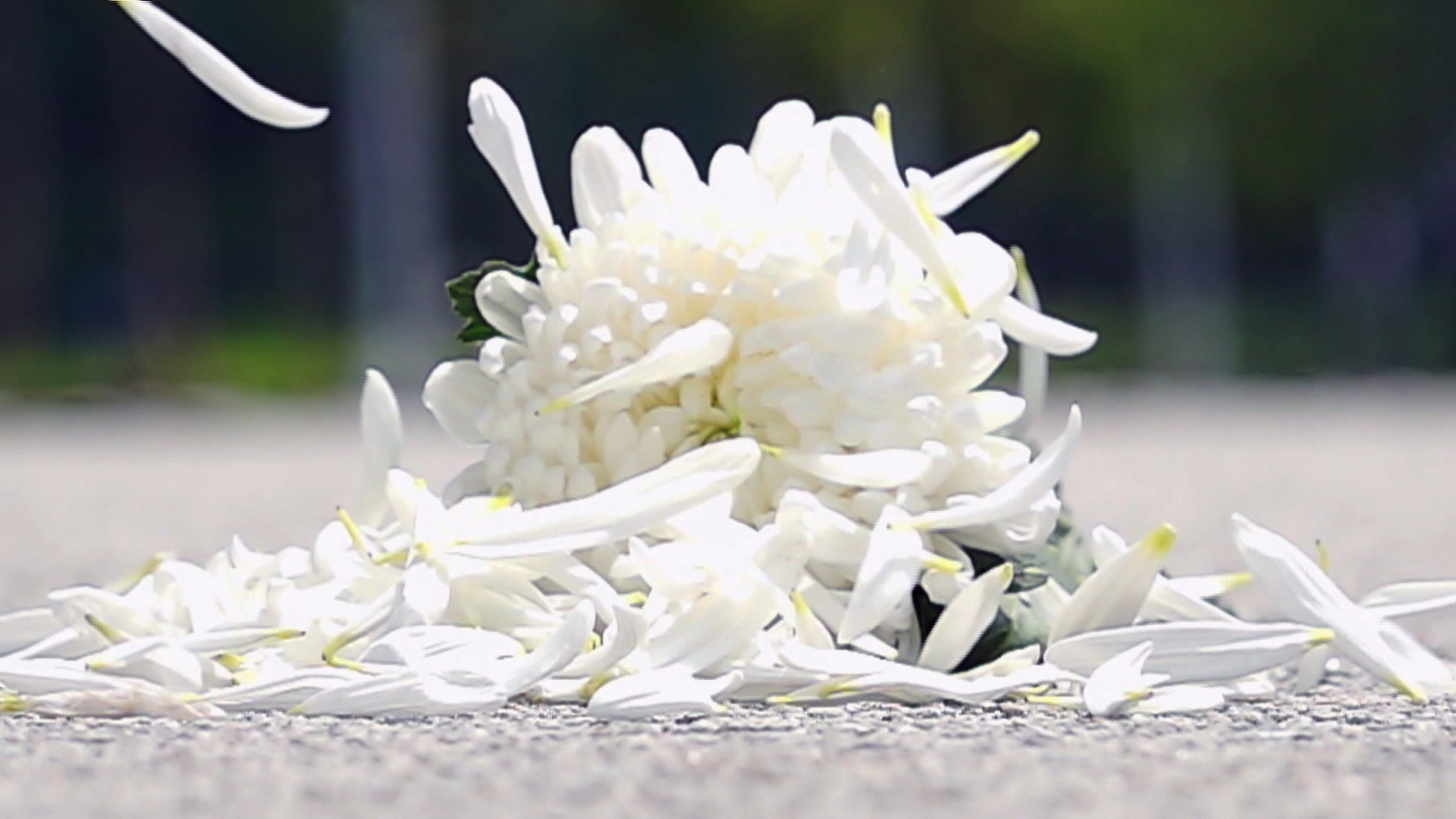 Blooming over the line 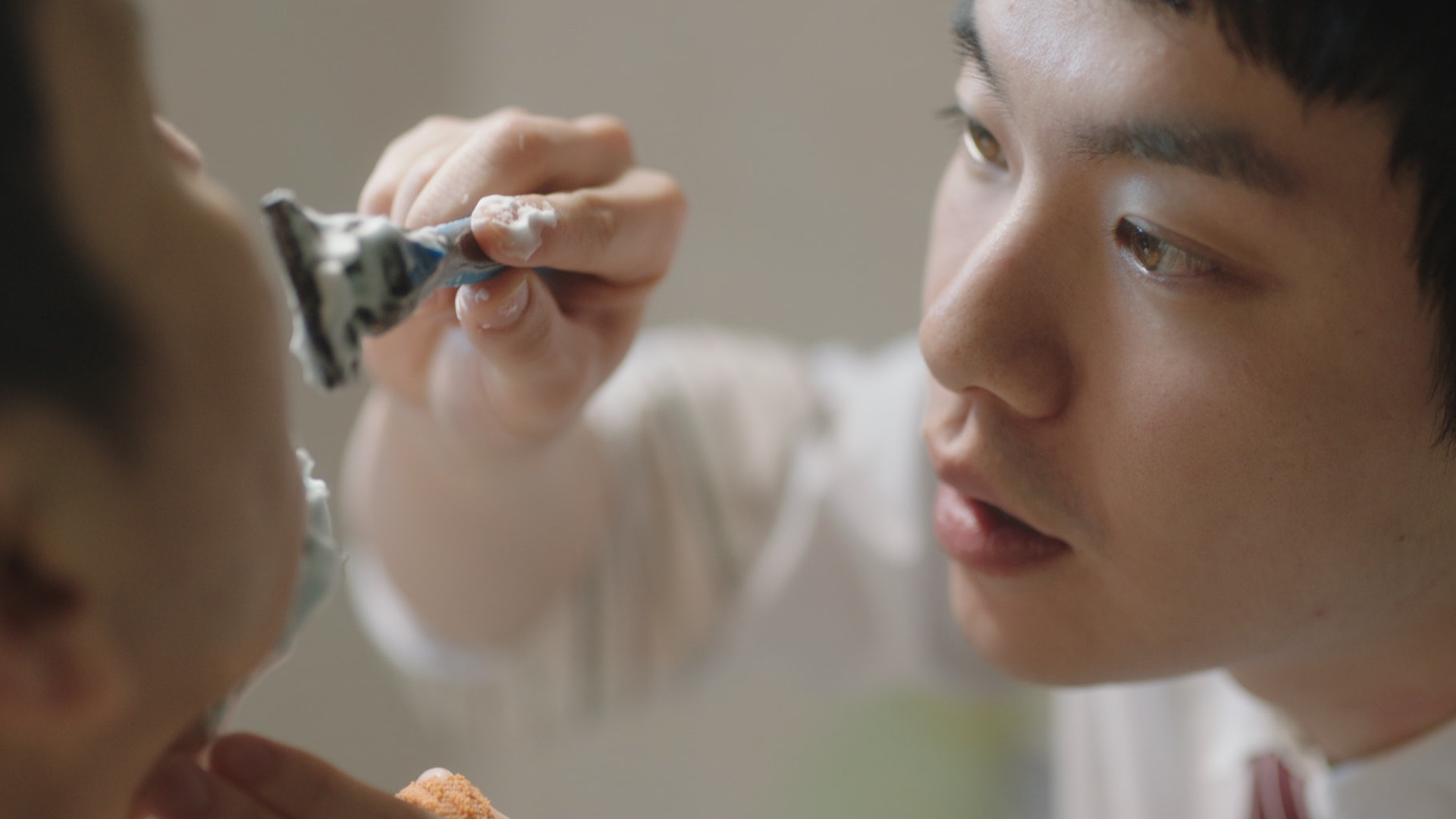 Normal is relative. A father, taking care of the 19-year-old handicapped son who declares his independence. He can´t take nor turn down his son who wants to live like a normal person for at least one day.
DirectorCHOE Equan
Korea 2020 119min DCP color Fiction 15 Korean Premiere
Korean Premiere 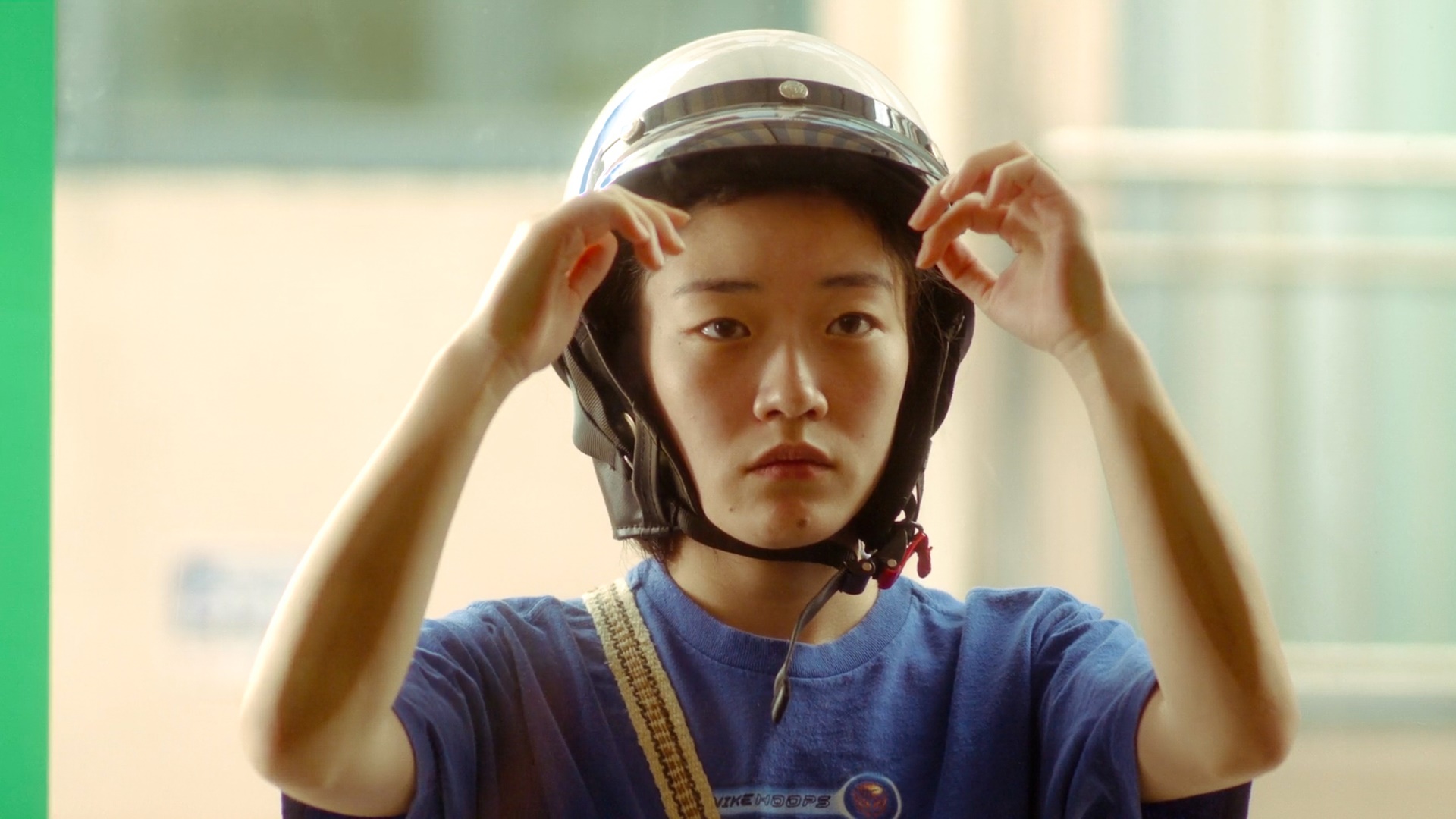 COVID-19 is rampant in the world. Juri, a 25-year-old young girl, stops socializing and has been just staying at home. Her mother, Young-shim struggles against the hard season, still running her Kim-bob place. One day, Young-shim leaves to take care of her sick mother, and Juri takes charge of the restaurant unexpectedly.
DirectorKWAK Min-seung
Korea 2021 74min DCP color Fiction 12 World Premiere
World Premiere 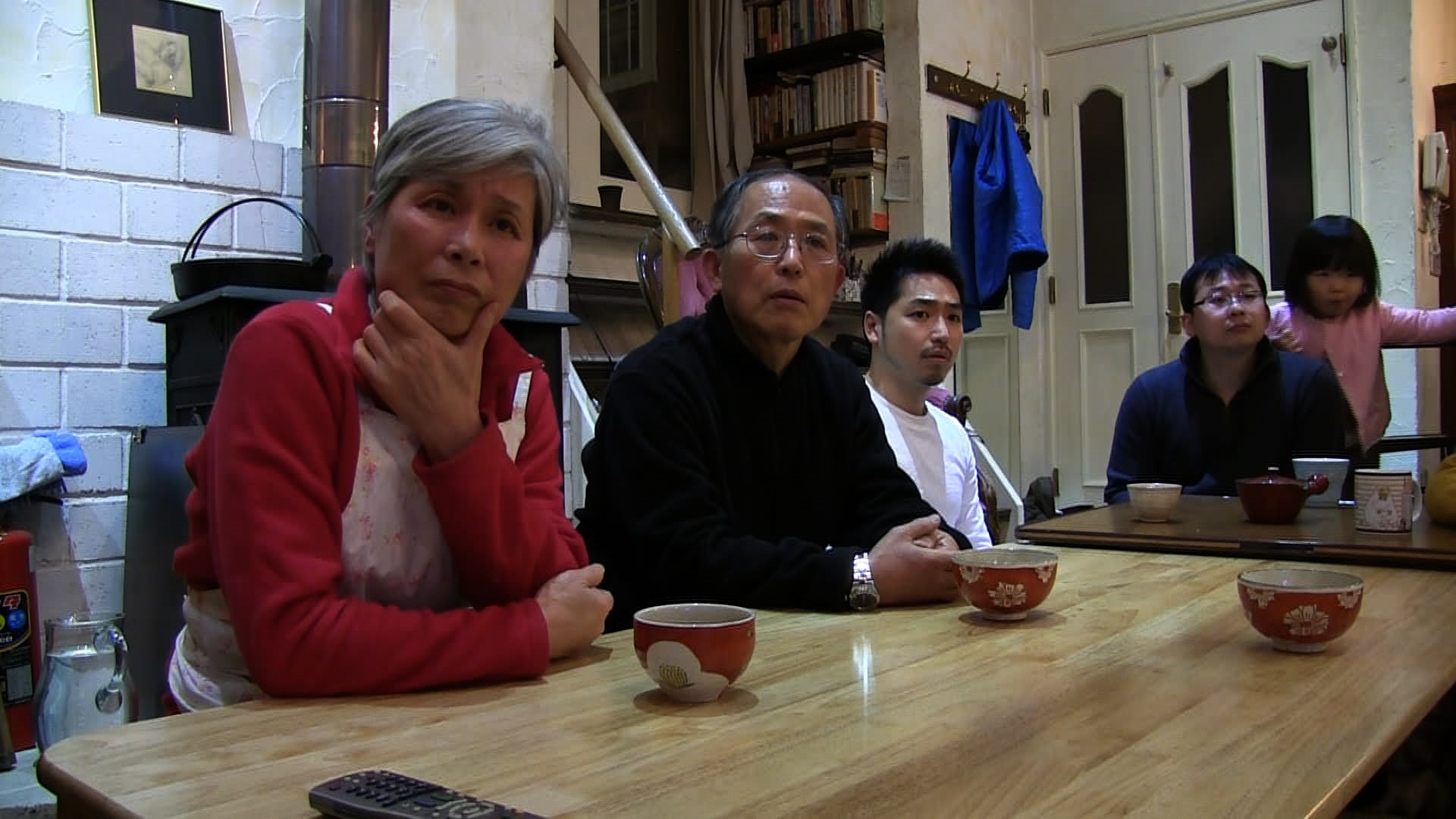 The Family of One Hundred Years

In Kawasaki, Japan, 1st to 3rd generation of Korean-Japanese and Americans share their daily lives and wish for a symbiotic society. The inter-Korean summit in 2000 brought reconciliation and hope to the divided Korean community. Meanwhile, hundreds of hateful demonstrators are approaching Sakuramoto, the Korean residence, amid deepening tensions between Japan and Korea in 2016.
DirectorKIM Duk-chul
Korea, Japan 2021 143min DCP color Documentary 12 World Premiere
World Premiere
Online 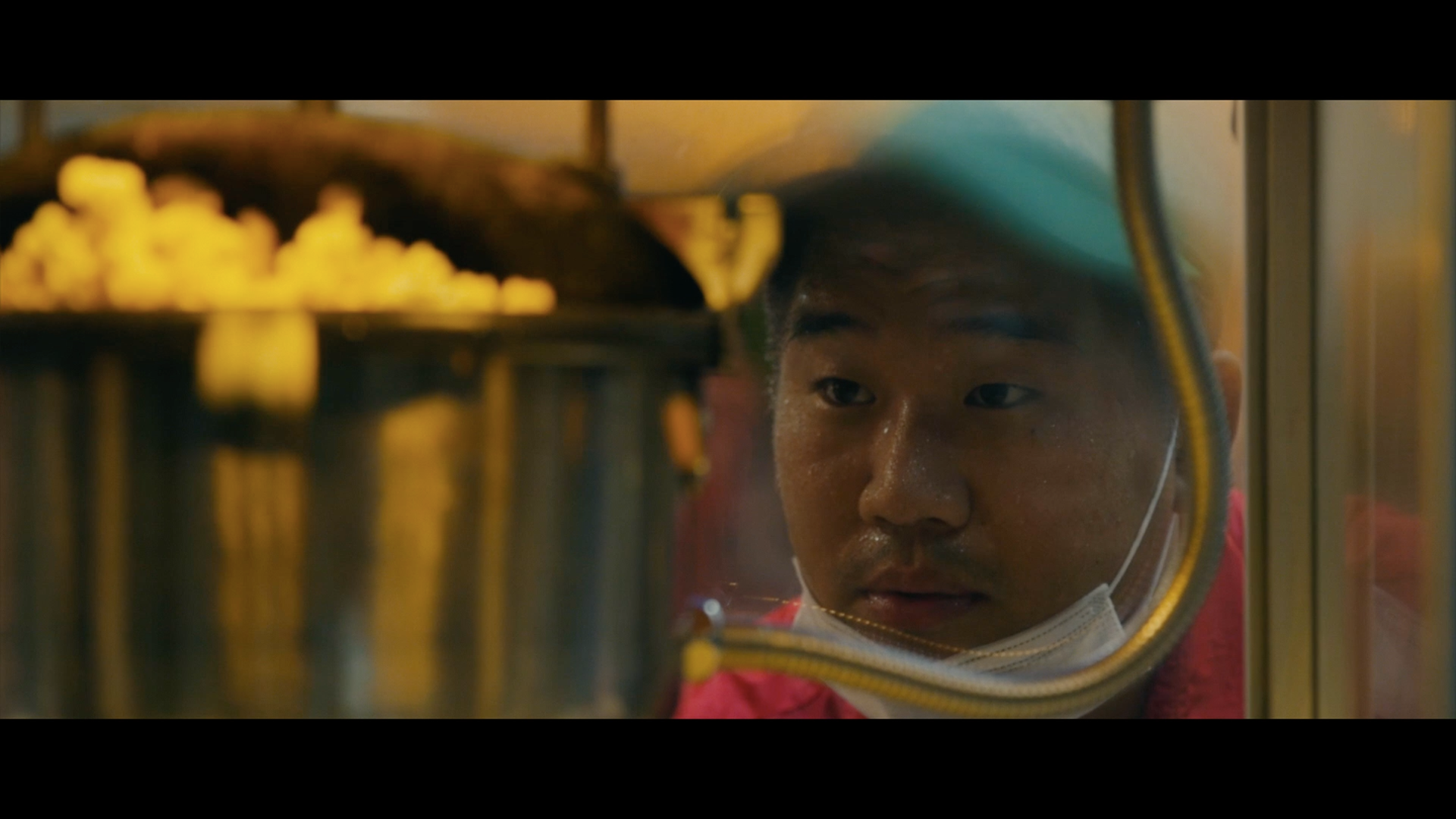 On a humid summer day, a preview of the director´s new film is held at a small theater in crisis due to COVID-19. As the boss refuses to operate the air conditioner, the tired part-timer´s patience begins to run out because of complaints from the heat-weary audience.
DirectorKO Bongsoo
Korea 2020 77min DCP color Fiction 15 World Premiere
World Premiere 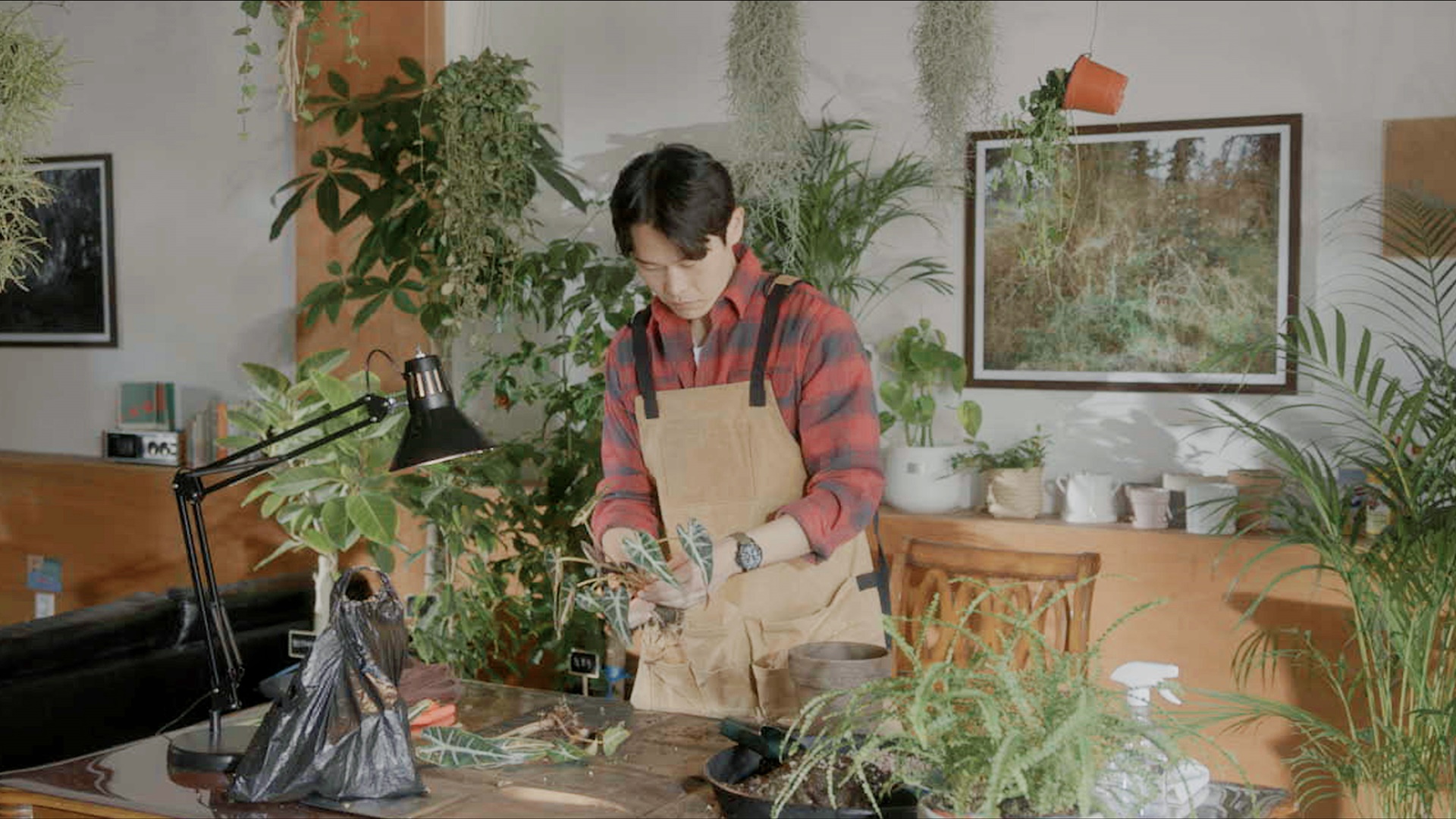 Hyeonjae was a war correspondent who quit due to his trauma of war. Thinking of the special communication he had with plants as a kid, he returns to his grandfather´s arboretum. At that very place, he gains the courage to live on and decides to run a plant café in the city. To his customers who seek him out with their stories and plants, Hyeonjae provides a remedy for not only their plants but also their hearts.
DirectorCHOI Changhwan
Korea 2021 75min DCP color Fiction 12 World Premiere
World Premiere
Online 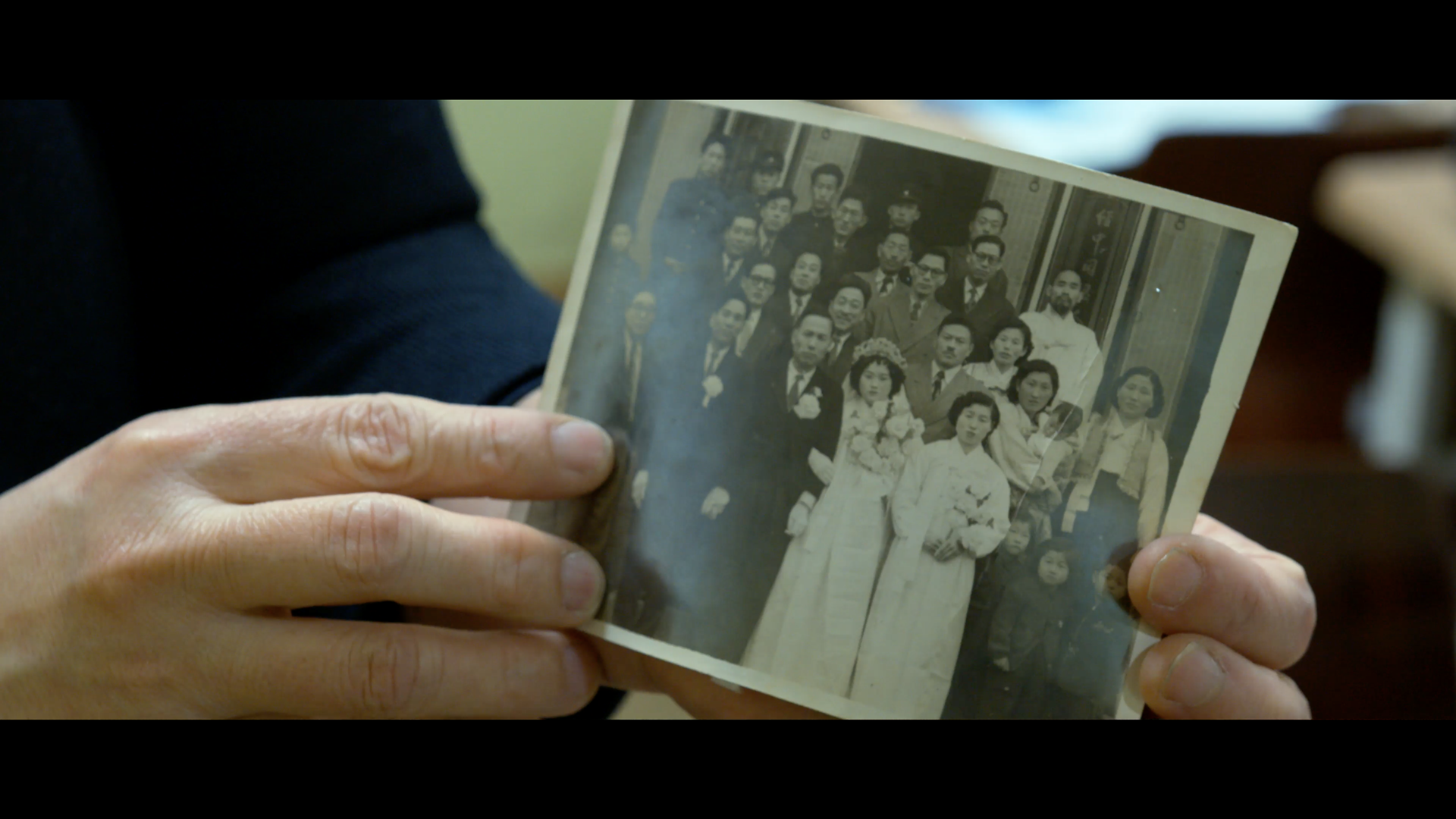 The Special Investigation Committee, which was created to punish pro-Japanese, was destroyed due to the interference of the Rhee Syngman administration. Since then, the Committee’s Investigators and their descendants live a painful life in the bondage of poverty and ideology.
DirectorKIM Jinhyuk
Korea 2021 174min DCP color/b&w Documentary 12 World Premiere
World Premiere
Online 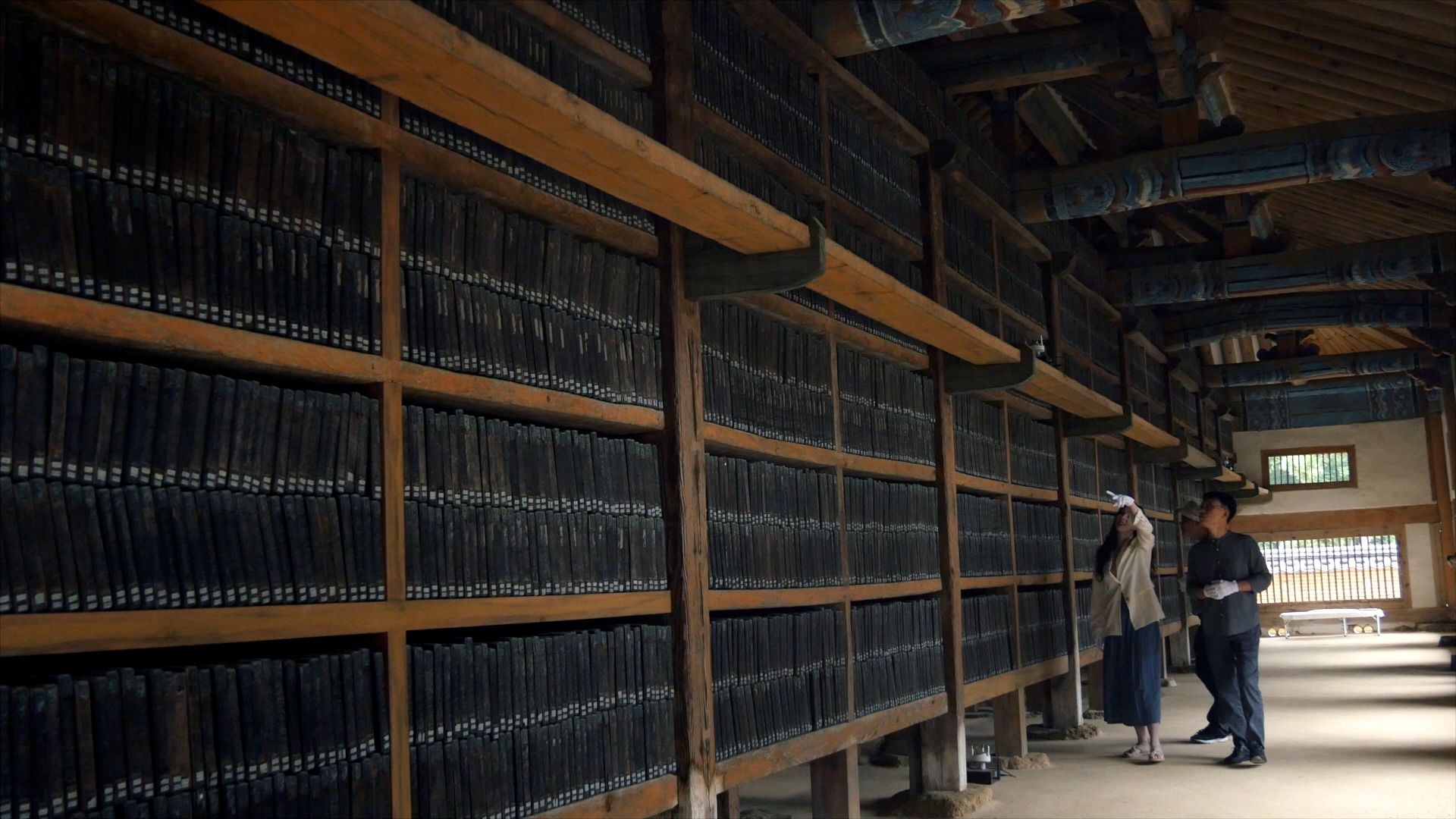 The documentary production team, which was tracking the connection between Gutenberg and Goryeo metal types, finds the "Pope´s Letter to King of Goryeo" in the Vatican archives. In the face of opposition from scholars for lack of relevant evidence, they leave for Europe in search of historical traces to complement it.
DirectorWOO Kwang-hoon
Korea 2021 97min DCP color Documentary G World Premiere
World Premiere
Online 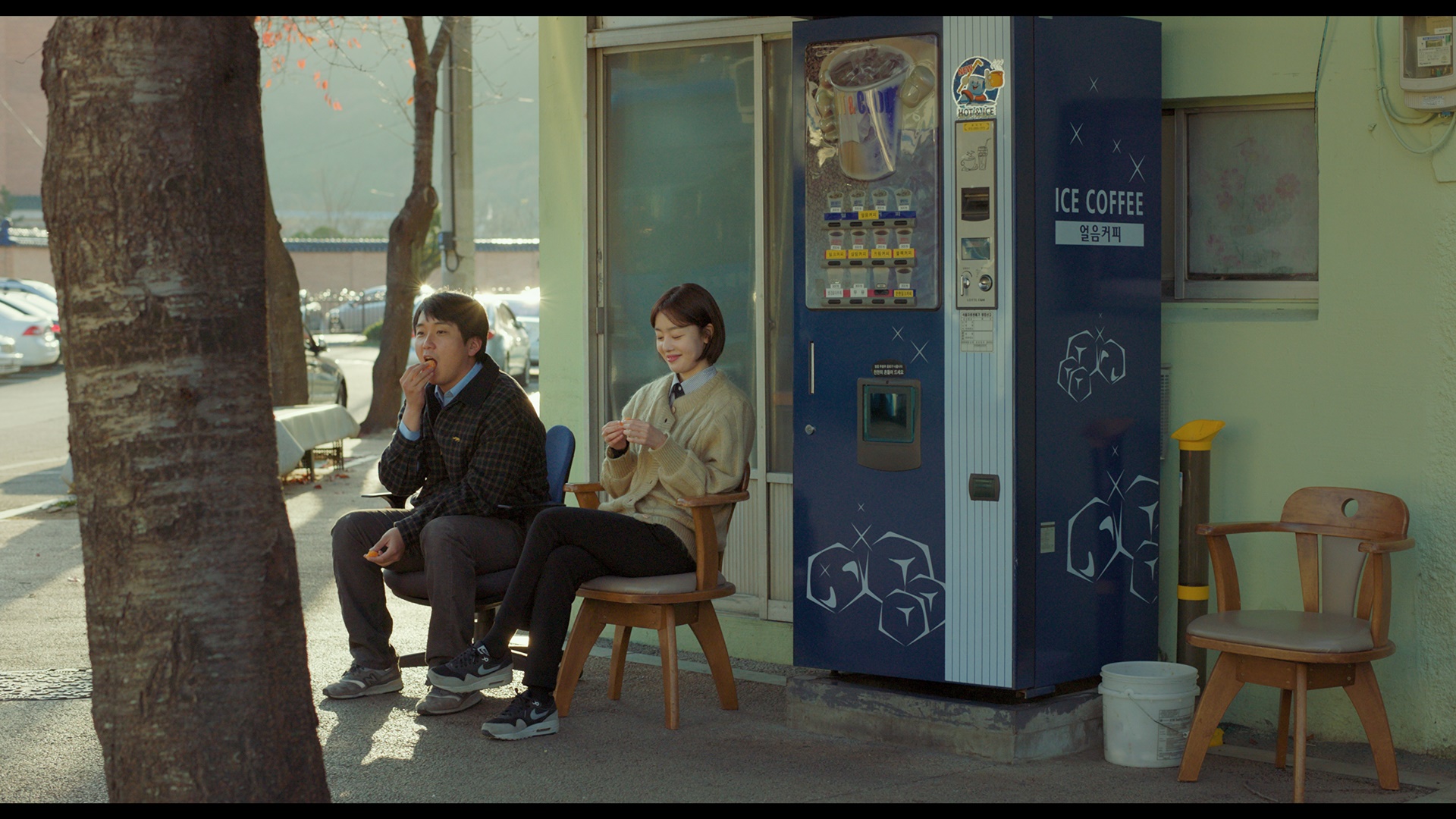 Once a film director, Seok-woo comes to his hometown, working as a bus driver. One day, he picks up someone´s MP3 player at the bus terminal and faces his past through the process of finding the owner of the MP3.
DirectorLEE Sangjin
Korea 2020 105min DCP color Fiction 12 World Premiere
World Premiere 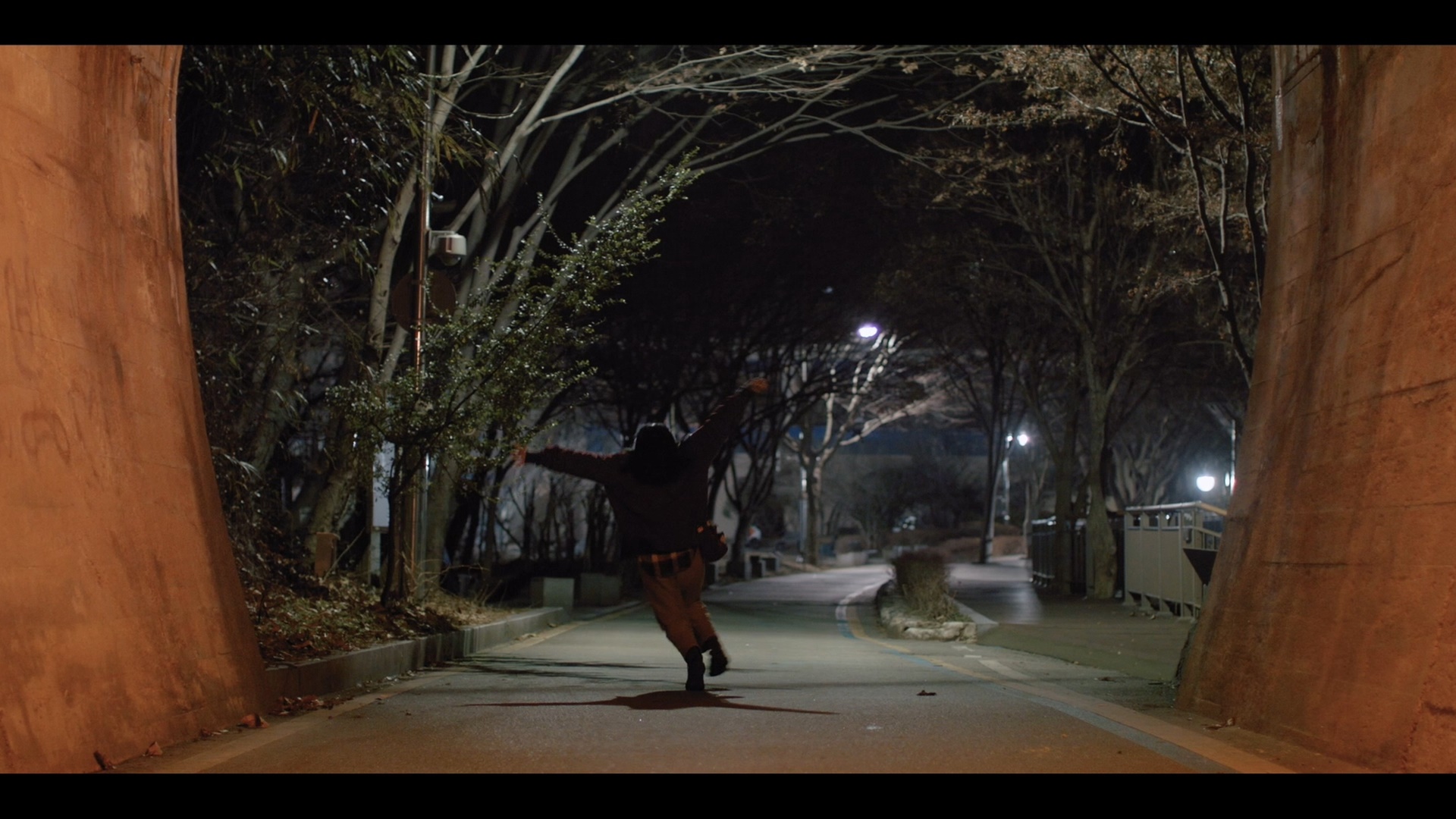 Chunhui, who is left alone after her parents died, grows up in her grandmother´s house. She can´t hold hands with people because of hyperhidrosis, and she makes a living by peeling garlic. Young Chunhui appeared in front of Chunhui, who was struck by lightning one day and survived.
DirectorCHOI Jinyoung
Korea 2020 99min DCP color Fiction G
Sponsor