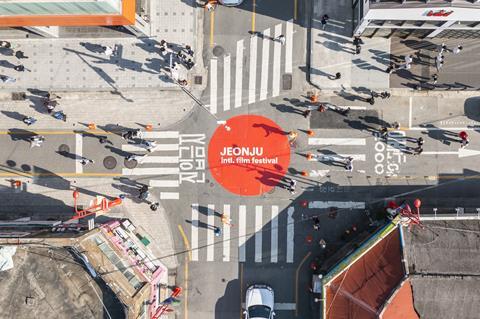 Gangsters, a Chinese dissident and a female truck driver are among the subjects of eight upcoming features that were pitched at the Jeonju International Film Festival in South Korea on Monday (May 2).

Eight titles were pitched in-person to an international jury as part of the Jeonju Cinema Project: Next Edition programme, which supports the production of innovative and independent films. The winners will receive up to KW100m ($80,000) to complete their film in time for a world premiere at the next edition of Jeonju.

Evenly split between Korean and international projects, the features included Colors Of White Rock, a France-Mongolia co-production that follows one of the few women truck drivers who transport coal from Mongolia to China.

The documentary is directed by Mongolia’s Khoroldorj Choijoovanchig and French producer Chantal Perrin was in Jeonju to pitch the project. “What first caught our attention was this line of trucks, which can reach 100km, while it can take a week to go through customs,” said the co-founder of Paris-based Petite Maison Production. “Then there is this articulate, brave woman in the middle of a man’s world. We’ve been following her and a few characters for close to three years.”

Contributions to the $430,000 budget have already been received from NHK, Sundance Institute and Colors of Asia.

Among the Korean projects pitched was Breath, the new documentary from Fighter director Jero Yun which the filmmaker says was inspired by the death of his mother in 2016. The film focusses on a mortician and an old woman, who collects “dead” scrap paper to sell at a junk shop. Produced by Lee Ginam, the project previously received support from DMZ Docs Fund and SJM Cultural Foundation Fund.

From Canada, Isiah Medina’s fiction feature Gangsterism will take inspiration from paintings and classic Hollywood films to deliver a fresh approach to the gangster film and address issues of white supremacy and racism. Pitching in Jeonju alongside producer Kelley Dong, Medina said the film would have an emphasis on philosophical dialogue and not feature “violence, profanity or drug use, stripping the gangster film to its core”.

From China, producer Jeremiah Foo pitched Reality Show, a documentary from director Lam Can-zhao, which tells the story of a Chinese man who was initially seen as a hero but became rebranded as a dissident. Foo said the director, who is in production on the film, is being trailed by police while making the documentary and envision their subject’s planned departure from China as the final scene.

The mother of a disabled child is the lead character of My Dear, from Korean director Lee Sangcheol. Casting is underway on the project, which has a budget of KW500m ($400,000) and is based on Ryu Seung-yeon’s autobiographical book I Reject The Term “The Village Idiot”. Both the director and producer Shin Aga presented the project and said they planned to show four periods in the film: pregnancy, birth, when the child is aged four and elementary school. Shooting is planned to begin in the coming months. Their first feature together, Metamorphosis, screened at Jeonju in 2009.

A further fiction feature from Korea was Fixed Love, Fixed Girl from director Lim Sun-ae, whose first feature An Old Lady won the audience award at Busan IFF in 2019. Of her upcoming second feature, she said: “I wrote this script before making my first film. I wanted to show a character who is alienated by society.” Set at the turn of the 21st century, the film centres on two women, one of whom is disabled, who try to get back on track after falling victim to a conman. The Korean Film Council previously awarded the project KW310m ($245,000) towards its total budgets of KW970m ($765,000). Producers are Park Kwansu and Lee Seung-bok.

Rounding out domestic titles was Tae Jun-sik’s 1997, a documentary about the state of South Korean society 25 years ago, when the country faced a major financial crisis and a bailout was negotiated with the IMF (International Monetary Fund). Around 600 documents released in recent years provide the backdrop for the film which questions whether the right choices were made. Producer is Kim Hwa-beom.

The final project to be pitched was When Clouds Hide The Shadow from Chilean director José Luis Torres Leiva, whose first feature The Sky, The Earth And The Rain won the Fipresci prize at Rotterdam in 2008 while his latest film Death Will Come And Shall Have Your Eyes played in competition at San Sebastian in 2019.

Producer Catalina Vergara said the upcoming fiction feature would follow actress and director Maria Alché as she travels to the world’s southernmost city, Puerto Williams, to star in a film. But when the crew are delayed, she begins to explore the area and its inhabitants. Vergara said: “It is a transformation story and a film about the pain of losing someone. As Maria waits in this landscape, she will heal this pain.” The project previously received support from the Hubert Bals Fund and National Audiovisual Chilean Fund.

A total of 41 films from 23 countries were submitted for this year’s JCP, from which the final eight were chosen.

Previous winners include Locarno-awarded The First Lap, directed by Kim Dae-hwan, and Dane Komljen’s Afterwater, which screened in this year’s Berlinale Forum.