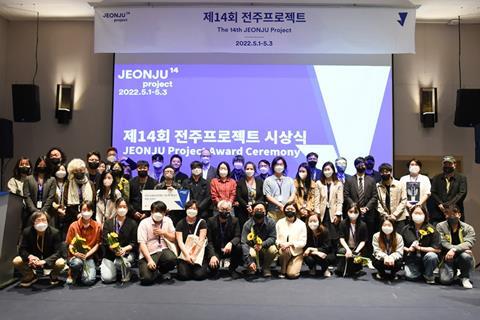 The Jeonju Cinema Project: Next Edition prizes – awarded to a Korean and international feature – provide up to KW100m ($80,000) in funding for projects to be produced with the caveat that they make their world premieres at the Jeonju International Film Festival. The titles were among eight pitched the previous day.

Breath is the latest documentary from Yun, whose fiction feature Fighter was selected for the Berlinale in 2021. The director said the upcoming film was inspired by the death of his mother in 2016 and focusses on a mortician and an old woman, who collects “dead” scrap paper to sell at a junk shop.

Accepting the award, Yun was overcome by emotion and had to turn away from the audience for a moment before explaining the difficulties both him and his producer Yun Lee Ginam had experienced working on the film.

The US utive said the jury chose documentary project Breath in the Korean category for “its unblinking look at the subject of death and the marginalized, pictured through a distinctive cinematic approach of great beauty and sensitivity” adding that “during a time of widespread suffering, it is essential to enable storytellers to speak of the community’s grief and challenges in unconventional and therefore revealing ways.”

In the international category, the jury praised fiction project When Clouds Hide the Shadow, which takes “a semi-documentary approach in a fascinating Chilean context and in a unique collaboration with actress-director Maria Alche” for “a work that promises a lyrical and moving experience combining delicate observation of the natural world with the story of a woman and her spirit moving through it and transforming from the experience.”

Produced by Catalina Vergara of Chile’s Global Rojo Films, it marks the latest feature from Torres Leiva, whose debut The Sky, The Earth And The Rain won the Fipresci prize at Rotterdam in 2008 while his latest film Death Will Come And Shall Have Your Eyes played in competition at San Sebastian in 2019.

Kasman added: “With the pandemic making the health of the film industry and the status of art cinema exceptionally precarious, it is inspiring to not only see a festival like Jeonju take place in order to celebrate film in a beautifully curated environment, but for the festival and for Jeonju to enable bold new films to be made through this funding initiative.

“It is essential for such institutions and such initiatives to exist in order to ensure the existence and vitality of what we love about the movies. The Cinema Project points the way to the cinema’s future.”.

Organizers reported 331 registered badge holders, an increase of around 43% from last year when there were 231. The industry programme saw 205 meetings held, down from 237 last year, although the total number of projects was 34 compared to last year’s 21.

Another big winner of the night was Korean director Kim Soo-jung with her Jeonju Lab project Portrait Of A Jeju Family. She ended up walking to the stage three times to accept the Jeonju Cine Complex award for digital colour grading, the Jeonju Film Commission award for in-kind support at the commission’s film studio, and the JICA award for sound mastering.