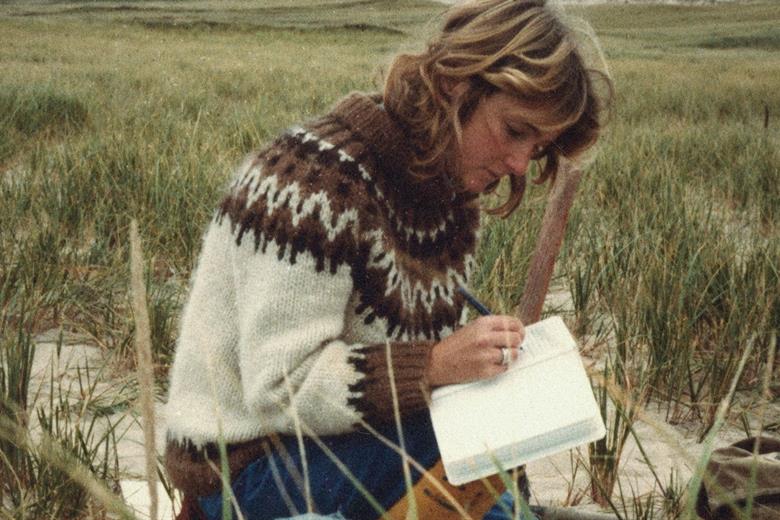 The combination of a unique personality and a fascinating place makes for a beguiling and poetic film, which blurs the lines between science and art. In 1971, a Canadian art student named Zoe Lucas managed to hitch a ride with a journalist visiting an isolated strip of land some 100 miles from the coast of Nova Scotia. Her initial interest in Sable Island was piqued by the herd of wild horses which lived there. But this wild patch of scrub, with its ever-shifting dunes and rich biomass, exerted a strong fascination. She returned, as a volunteer cook on a seal research project, and stayed. More than 40 years later, she is still enthralled by the place and has dedicated her life to studying and cataloguing every aspect, from the life cycles of the horses, to the infinitesimal variations in the native beetles to the plastic waste which washes up from the mainland. And now, in this poetic collaboration with filmmaker Jacquelyn Mills, the island becomes the mixed media basis of an art project, its sounds threaded into music, its fabric organically captured by 16mm film.

The feature debut from Mills, Geographies Of Solitude wins Jeonju’s International Competition, having already taken home the C.I.C.A.E. Art Cinema prize, the Caligari Film Award and the prize from the Ecumenical Jury following its premiere in Berlin’s Forum. Mill’s previous work includes In The Waves, which premiered at Visions du Réel and was awarded the Grand Jury Prize for Best Medium-Length Documentary. Further festival screenings are likely for Geographies Of Solitude, and a limited theatrical release is possible. The film’s combination of environmental awareness, artistic inspiration and a depiction of a life closely attuned to nature could resonate with the same audience to that of the similarly themed Glasgow prize-winning documentary The Hermit Of Treig.

At first glance, Sable Island is not the most strikingly beautiful place. Sand and stunted vegetation, seabirds and a fair amount of horse manure: Lucas estimates that over a ten year period she probably carried something in the region of 6000 pounds of manure in her backpack for analysis. But the island’s charm soon becomes evident, in a shot of the most showily extravagant night sky imaginable, in the way the wind ripples the grass like the pelt of a sleeping animal. Most of all, the allure of the place comes alive through Lucas’s observations – she knows the island so well that she can pinpoint a particular dimple in the land where the scent of wild roses and yarrow gathers. She relishes all aspects of the natural cycle, including the deaths which, she enthusiastically points out, replenish nutrients and trigger a burst of fecundity. She has a favourite grass species: “You can crawl in between the stems”. The sound of the wind, she says, makes it feel like being in a green ocean.

Sound is integral to the filmmaking, with specially designed mics used to capture the skittering rattle of beetles’ feet, the chuntering seals and the efficient crunch of busy ants. The score blends the ambient sounds with chimes and wistful harmonics.

But even in a place as isolated as Sable Island, the outside world encroaches. Lucas collects the plastic detritus which lands on the beach, her meticulous documentation of balloons, bottles, packaging, toys and tat is a reproach to a thoughtless world, her message a simple one: live lightly on the earth, and with love.